The GTA 5 game offers the surrounding area in long highways, farms, mountains, and various parks. Since the territory is vast, residents need as much protection from criminals as possible. For this in Los Santos, several ions are provided. In “GTA 5,” most of the objects and their location copy the actual situatiactualn, Los Angeles. Consider all the places in which the police headquarters are located in the metropolis and the countryside. If you look at all the sites, you will notice that each of them is tied to a specific area of ​​the virtual city. Below is a brief description of where the police stations in GTA 5” are located and the functionality of each building. 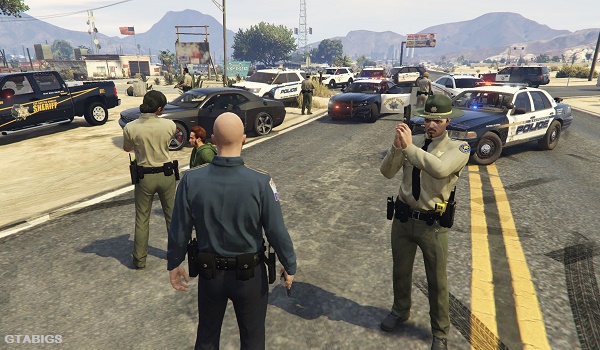 Where is the GTA 5 police stations?

The GTA5 police station does locate in the southern urban area. Online mode players can change the police to enforce the law in the game. Please refer to the red marking points in the figure below for the specific location coordinates.

The Commissariat Vespucci is a police stations in GTA 5. Like all police stations in the game, this serves as a spawn point if the player was arrested in the area. The building is relatively modern. In this police station, it is possible to find the Police Riot, an armored police vehicle.

It is a large, two-story building with its façades clad in aluminum plates. Behind the offices is a closed garage where the police department vehicles are kept. In front of and to the side of the police station, several patrol cars can be found parked.

The Commissariat de Los Santos is a police base located in Commerce, Los Santos, and San Andreas. It is a public building facing Pershing Square, with a kind of tower in the center. On the left, there is a garage for police vehicles. Entering restricted places in the police station will bring up three search-level stars. If you equip a weapon inside the building either from the inventory or by getting one of those at the police station, the search level is two immediate stars.

The Mission Row Police Station is one of the police stations of the Los Santos Police Department. It is located in the Mission Row neighborhood. It is also the only one with an accessible interior.

On the right, we will see a helipad and behind the building is the parking lot where we can find several police cars. But if they see us enter, they will ask for reinforcements. We will raise the level search to 3 stars. This is the only police station in San Andreas that is not accessible by typical methods. It is only accessed from the underworld.

The Las Venturas Police Station is a police station with a modern facade, located in Roca Escalante, in the city’s northeast corner.

The Commissariat Davis is a police stations in GTA 5. The Los Santos Police Department operates it. It is located in the Davis neighborhood, in the south of Los Santos.